The widows of India periodically receive publicity in the Western media, perhaps because there are more there than in any other country (46,457,516 in the latest census – yes, that is millions, which is more than the entire population of Canada!)  More likely it’s because they are very visible as a discriminated-against minority.

India has several cities where widows have congregated in huge communities, and their lifestyle there tends to shape the Western imagination about what it’s like to be a widow in India. And yet despite the publicity, they remain “the faceless living dead”. 1

Men in India may succumb to disease and death because of terrible working conditions in factories, because of contagious diseases such as TB and HIV/AIDS, because of tiger attacks (tigers are coming much closer to inhabited areas because climate change is reducing their usual habitat), because of drowning accidents in the fishing trade, sometimes because of ethnic conflict,  or accidents, in addition to the "normal" causes of death.

Imagine yourself to be a 9-year old who’s been married to a much older man (though you won’t go to live with him till you’re older and able to fulfill your marital obligations). One morning you’re told that your husband has died, and suddenly your family is removing your colourful clothing and dressing you in a white sari, your pretty glass bangles (bracelets) and your earrings are removed, your hair is shaved off, and you are told that you’ll be taken to Vrindavan (or Varanasi or Radhakund) to live for the rest of your life at an ashram (religious retreat centre). There you’ll chant religious songs and prayers in the temples, and beg from the worshippers or in the streets. Your meagre earnings are handed over to the head of the ashram where you live, in return for a plate of food and a room to sleep at night.

In the ashram you’ll find women of every age abandoned to this never-ending nightmare. And many of them, like widows and women all over India, have found they must be vigilant against rape or being forced into prostitution. Being consigned to a life of chanting prayers and sacred songs is no protection for the “woman alone”.

Or you may be a middle-aged woman married to a businessman and mother of several children, all doing well in school. Your husband is killed in an accident, and suddenly you become one of the discriminated-against minority. You still have the house and the money he left, but as far as society (and your in-laws) is concerned you have become a curse, someone they shun in public and forbid to participate in any social or religious events, even your own children’s weddings. It’s as though your life ended when his did. 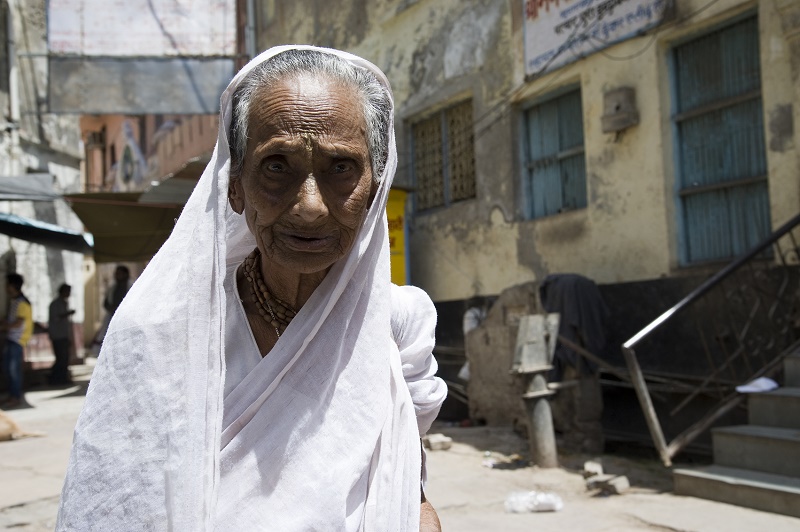 Or you may be an older woman who with your husband has lived with your oldest son and his family for many years. You’ve had a good relationship with your son and daughter-in-law, until the day your husband dies. Overnight everything changes. You feel the resentment and hostility in their looks and voices. You have everything of value taken from you, and you are forced to put on the white sari of widowhood and give up your solid gold bangles. You struggle to maintain your place in the family, but eventually the hostility and outright abuse wears you down. So the day your adult son tells you to get out, you are no longer welcome in his house, it comes almost as a relief.

But then you have to try to support yourself. Must you humiliate yourself by begging? If you were younger prostitution could be a most unwelcome option. You’re too old to hire yourself out as a servant. How does an older woman survive? So you too begin the dreadful pilgrimage to one of the cities of widows (or your son may take you there himself and abandon you).

THE FACT OF KARMA

Before we judge too harshly, it's important to realize that age-old religious belief has decreed that the widow needs to atone for whatever wrong she may have done in her life,  which caused untimely death to be her husband's karma. By properly mourning him the rest of her life, she may hope for a better reincarnation.

The government of India has been slow to effectively address the problem of the millions of widows; however in some cases there are small pensions available to them, and there are laws that make it a punishable offense for children to abandon their parents. Unfortunately far too many widows are illiterate and unaware of the laws; they live in rural areas so going to a bank to collect their pension is almost impossible; or they choose not to charge their adult children for abandoning them because they do not want to bring shame on their family. It’s estimated that more than half of India’s widows have no source of income.

Widows in the Muslim communities fare a little better because their religion encourages a more respectful care of widows, including encouraging remarriage if they wish it. Part of a Muslim’s required zakat (charitable donations as a required percentage of his income) is to go to the support of widows and orphans in the community.  For the Muslim widow however, as for her Hindu counterpart, life becomes very bleak because she no longer has an identity without a husband, and because her presence in the home of her adult son or of her in-laws is often felt to be an unwanted financial burden. If she remarries her position in the new home (where she is most likely a second or third wife) is difficult, and she may be treated as a slave.

Hindu widows are not permitted to remarry. The widows’ communities in several cities (estimated at anywhere from 2000 to 20,000 widows in Vrindavan alone) may seem like a welcome refuge; but for the women who live there for endless years, it’s no paradise. Beyond a begging bowl, a white sari, bedclothes and a bed, they own nothing. They share a bare, austere room with several other widows; and every morning they wake early to chant prayers for hours, before going out on the streets to beg. Evening allows them a little respite once they’ve given their day’s earnings to the ashram leader, for then they get a plate of basic food (probably rice and lentil curry) before going back to the chanting.

IS THERE ANY HOPE?

What gives them hope? What gives them a sense of self-worth? How do they fight against the enormous weight of depression? What impact does this have on young children growing up in such an environment? Little wonder that God’s heart aches for these women, and little wonder that people with a social conscience have been motivated to try to change conditions for widows in India.