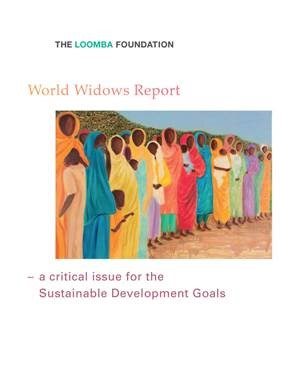 All the Data in One Place...

This report is hugely significant because it is the most comprehensive report ever compiled on the state of widows worldwide, exposing the extent of the cruel injustices that the majority suffer.

It was commissioned by The Loomba Foundation, and published to coincide with the United Nations’ adoption of the Sustainable Development Goals in 2015.  (The SDGs are an ambitious blueprint for ending poverty, hunger, discrimination of every kind worldwide).

UP TO DATE STATISTICS

The World Widows Report provides the most up-to-date statistics from every country that does keep statistics on widows,

§  explores the reasons for higher-than-average numbers of widows in certain countries,

§  exposes the way they are stigmatized in so many regions,

§  reflects on how widows’ destitution impacts their children’s present and future,

§  gives recommendations as to what governments and the world should do about it.

Yet, as the report points out, the data they gathered confirm how very little research has been done and how little public policy exists in various countries regarding widows.

If you like numbers you’ll find plenty of them in this report, and the sheer volume of numbers of widows is truly shocking.


If you prefer commentary, there’s lots of that, painting a very uncomfortable picture of a world in which women are treated in the most appalling fashion, as if they were to be punished for life for the death of their spouse.

Quite frankly, it makes for depressing reading – and yet can we let ourselves ignore the plight of widows just because it makes us feel uncomfortable or depressed?

The Foreward to the report challenges us to understand that “the plight of widows is a moral issue…” (p.9).

The report references CEDAW’s1 “Forward Looking Strategies” which include the provision of widows’ inheritance (one of the factors that leaves so many women utterly destitute in developing countries) and comments that “The existence and ratification of CEDAW in many countries together with the existence of modern law, have however offered little protection to widows, where affordability and lack of enforcement undermine the rule of law…” (p73).

You can download a free pdf copy of the report or you may buy a bound copy from The Loomba Foundation’s website (www.theloombafoundation.org) if you prefer.

Another initiative of The Loomba Foundation has resulted in the declaration of June 23rd as International Widows Day. Please read about it and let your imagination suggest ways in which you might mark this day of advocacy.

1 The Convention on the Elimination of all Forms of Discrimination Against Women (CEDAW) is an international treaty adopted in 1979 by the United Nations General Assembly. Described as an international bill of rights for women, it was instituted on 3 September 1981 and has been ratified by 189 states.